Meet Rory, 8, the newest and youngest member of the Douglas Town Band, the longest established brass band on the Isle of Man. Rory has played the cornet for a year, but last week marked his public debut with the band. Watching Rory was such fun. He was so excited to be there, as were his many well-wishers who cheered him on and took pictures. Rory had a little problem keeping his place in the music, and the two women sitting by him kept helping him find it. So dear! (I just wanted to pinch those cheeks!) 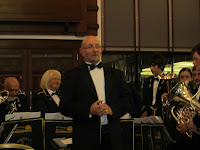 And what an array of music they played! Tunes of the Sea was the theme for the evening and we heard such delights as the theme from “Pirates of the Caribbean,” Rod Stewart's “Sailor” (a song originally written by an IOM band), and a tune from a Mutiny on the Bounty suite. (Capt. Bligh married and lived on Man for awhile, and Mr. Christian, who led the mutiny against him, was from a well-known family on the island.) We also heard a fabulous trombone soloist (and I know a little about trombone soloists!) named Juan Wright.
Juan's Quintet, Sheean Prash 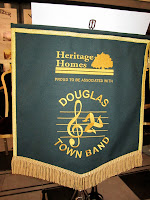 You have to admire the brass band culture found in the British Isles which embraces cutting out the unnecessary elements of a band—like the strings and woodwinds—and leaving just the good parts! (Just kidding!) This culture is intensified on the IOM which boasts seven local brass bands.
We saw the Onchan Town Band several nights later. They are a younger group than the Douglas band, both in average age of the players and in years established, but they gave a spirited and strong performance. Many of the Onchan Town Band soloists were absent, so the band made a bold move in the second half by playing what they called Oom-Pah Songs and encouraging the audience to sing along. We sang and sang, and a few older ladies got up and danced, even pretending to lift their skirts (they wore pants) to the “Can Can.” The highlight of the evening for me was getting to sing the IOM national anthem as well as its unofficial national anthem, “Ellan Vannin”.
Bee Gees perform "Ellan Vannin"
Inspiring!
Posted by Karen Tooley at 6:11 AM

Add comment
Load more...
Newer Post Older Post Home
Subscribe to: Post Comments (Atom)
I once saw a doctor in Germany who, placing his stethoscope against my chest, asked me to take deep breaths.
"Inspire...
Expire...
Inspire...
Expire."
I have thought of this often through the years, and I think the good doctor was advising me to breathe deeply as I travel, and enjoy it all: the people, the customs, the sites, the food.
Or perhaps he was telling me to drop dead.

Karen Tooley
I began traveling abroad in '82 when my husband and I spent a year in Germany for his dissertation research. Since then I have had the good fortune to cross the Atlantic 36 times for a total of 120 weeks abroad. I have stayed in hotels, homes, hostels, tents. I have washed clothes in bidets, eaten peanut butter with a toothbrush handle, been attacked by a parrot, given birth speaking German. (“Keep the drugs flowing, bitte.”) I have traveled with my husband, our three sons, friends, college students, alums. Everyone has a travel philosophy, I suppose, and mine is: Do not complain. People will begin avoiding you and you'll soon have no dining companions. Instead, just be happy you're on a trip and not at home taking out the trash.